According to Hurvitz, the findings of trials such as DESTINY-Breast04 and TROPiCS-02 shed light on potential new therapies for breast cancer, though more research is needed to address new agents and other unmet needs.

One such study is the randomized phase 3 DESTINY-Breast04 trial (NCT03734029) which compared trastuzumab deruxtecan (T-DXd; Enhertu) with the treatment of physician’s choice (TPC) in patients with HER2-low metastatic breast cancer.1 Hurvitz believes that the trial results demonstrate how trastuzumab deruxtecan can improve both progression-free survival (PFS) and overall survival (OS) in this patient population, though the current data do not indicate it as suitable in the frontline setting.

Moreover, the randomized phase 3 TROPiCS-02 trial (NCT03901339) was a similar study that compared the efficacy of sacituzumab govitecan (Trodelvy) versus TPC in hormone receptor-positive/HER2-negative advanced breast cancer. Although this trial met its primary end point in terms of the impact of sacituzumab govitecan on OS, Hurvitz noted that the data are still “immature,” suggesting the possibility of future work to further specifying when treatment should be employed.

(Editor's note: Updated efficacy findings from the TROPiCS-02 trial were since presented at the 2022 European Society for Medical Oncology (ESMO) Congress. The updated results indicated that sacituzumab govitecan produced a median OS of 14.4 months vs 11.2 months in the physician's choice arm [HR, 0.79; 95% CI, 0.65-0.96; P = 0.02], and that the agent met the primary end point of PFS.2)

“Overall, the meeting really does provide us a lot of evidence that novel therapeutics are here to stay,” Hurvitz said. “We have more to come, so it’s an exciting time in the world of breast oncology.”

Hurvitz, professor of medicine in the Division of Hematology/Oncology at the David Geffen School of Medicine, medical director of the Clinical Research Unit at the Johnson Comprehensive Cancer Center, and director of the Breast Cancer Clinical Trials Program at the University of California Los Angeles, spoke in detail with CancerNetwork® about the aforementioned trials presented at ASCO and their nuanced implications for the future of treating HER2-positive breast cancer.

CancerNetwork®: What were some of the findings that were read out from DESTINY-Breast04 at this year’s ASCO meeting?

Hurvitz: The DESTINY-Breast04 trial [provided] the biggest splash of data presented at ASCO. In this clinical trial, trastuzumab deruxtecan, which targets HER2 as an antibody-drug conjugate [ADC], was compared head-to-head against treatment of physician’s choice, which was single-agent chemotherapy. And in this trial, patients were allowed on the study if they had HER2-low expressing breast cancer as assessed by immunohistochemistry [IHC] assay. Eligible participants had 1+ or 2+ expression of HER2 by IHC. And for those who had 2+, the ISH [in situ hybridization] had to be negative. The thought process behind testing T-DXd in this population is that it has a bystander effect, whereby the ADC delivers the chemotherapy to the HER2-expressing cell. When released within the cancer cell, the cytotoxic payload is membrane permeable and is able to kill neighboring cancer cells with a lower expression of HER2, so it doesn’t require this high level of HER2 overexpression that drugs like trastuzumab [Herceptin] or T-DM1 [trastuzumab emtansine; Kadcyla] require.

And there was early evidence in a phase 1 study [NCT02564900] that [T-DXd] may be effective in HER2-low breast cancer with a response rate in the 30% to 40% range.3 In this large randomized phase 3 study, T-DXd indeed did show an improved progression-free survival and overall survival, and an objective response rate [ORR] around 50%. In patients who had had prior endocrine therapy and 1 or 2 prior lines of chemotherapy for metastatic disease, there was a small subset of the population that had triple-negative breast cancer that was HER2-low expressing. And although the data set was small—only 40 such patients treated with T-DXd in this trial had triple-negative disease—the data are really encouraging with PFS and OS similar to the overall patient population. These data are indeed practice changing.

Pretty soon, we will see FDA approval or indication for this drug for patients who have HER2-low expressing metastatic breast cancer [editor’s note: trastuzumab deruxtecan has since been approved in this context]. I don’t see this agent [being used] in the frontline setting or replacing endocrine therapy. I would stick with the way the clinical trial was run and use this in my hormone receptor–positive, HER2-low expressing patients where the data were strongest. That’s what was represented by most of the patients enrolled here after exhausting endocrine-based options and a line of chemotherapy.

There’s been a lot of discussion around the HER2-low space. How do you feel that this research might impact the treatment of patients with HER2-low disease?

There are some issues with the [DESTINY-Breast04 trial] data that have been called out. First of all, how acceptable is IHC testing in defining patients who will benefit from T-DXd? IHC assays are problematic and that there’s a lot of interlaboratory and interpretation variability, it was not an assay designed to assess low levels of HER2 expression. [IHC] was designed to assess overexpression versus no overexpression, more of a binary distinction. And we don’t yet know [whether those with] IHC 0 benefit from T-DXd. In fact, there was a study called DAISY [NCT04132960] presented at the San Antonio Breast Cancer Symposium in which patients with IHC 0 metastatic breast cancer were treated with T-DXd.4 About 30% of patients had their disease respond, so this is going to be a key factor that needs further investigation.

Should we develop ultrasensitive assays? What is the threshold for protein expression of HER2 for there to be benefit from this agent? We also are looking forward to studies testing whether you can sequence T-DXd with other ADCs like sacituzumab govitecan, which has a similar cytotoxic payload mechanism of action. Is there cross resistance if you used sacituzumab or T-DXd first and then switch to the other? That has not been tested at all, so we’re not sure. And then we need trials that specifically enroll patients with triple-negative disease to better evaluate and understand what the benefits of T-DXd are in this patient population.

Regarding the TROPiCS-02 study, could you touch on some of the efficacy findings for sacituzumab govitecan?

Sacituzumab govitecan is already FDA-approved in triple-negative metastatic breast cancer based on the ASCENT trial [NCT02574455].5 This is an ADC that targets Trop2. It’s got a cytotoxic payload: the topoisomerase 1 inhibitor. It’s very potent, and in the ASCENT clinical trial, sacituzumab govitecan was shown to be associated with a better objective response, better progression-free survival, and better overall survival compared with chemotherapy.6 The antigen that sacituzumab is targeting, TROP2, is not just expressed in triple-negative disease; however, it’s relatively ubiquitously expressed in breast cancer. The TROPiCS-02 trial was carried out to assess sacituzumab govitecan in hormone receptor–positive metastatic breast cancer, which is the most prevalent type of breast cancer.

In [TROPiCS-02], patients were very heavily pretreated with a median of 3 prior lines of therapy in the metastatic setting. [The patients] had to have had 2 prior lines of chemotherapy and exhausted endocrine therapy. These are patients who have had a lot of treatment, and sacituzumab govitecan or treatment of physician’s choice single-agent chemotherapy was given. In this trial, sacituzumab govitecan did improve progression-free survival for patients and it did meet its primary end point with a trend toward improvement in overall survival. However, the data were immature.7

When you look at the actual delta or difference between the 2 treatment arms, there was only about a 5-week difference between in terms of PFS, which is not the stunning homerun we’ve gotten spoiled with from the ASCENT trial or studies like T-DXd in DESTINY-Breast04. Moreover, we must keep in mind the [safety] profile of sacituzumab. There was a fair amount of neutropenia and diarrhea, so patients needed to be monitored closely. You wouldn’t want to put a patient who had a poor performance status on this therapy; it’s not likely going to benefit them. The quality-of-life parameters that were reported, however, were very encouraging. The global health status and time to deterioration were improved with sacituzumab govitecan. Those data are encouraging. This is an agent that may become available for hormone receptor–positive disease in that later-line setting. It’s really notable, though, that by 12 months, 80% of patients in both arms had progressed. [The data] highlight that this heavily pretreated population with hormone receptor–positive breast cancer still [represents] an area of unmet need, and we need more studies like this addressing new agents.

Where do you think future efforts need to be focused? Based on TROPiCS-02, do you think that a combination regimen might be the solution here?

Sacituzumab govitecan should be evaluated in a slightly earlier-line setting, perhaps after one line of chemotherapy, to see if the outcomes are better than waiting until after multiple lines of chemotherapy. We still need to define whether you can sequence sacituzumab govitecan with T-DXd because it has shown marked benefits in hormone receptor–positive, HER2-low expressing breast cancer, which represents roughly two-thirds of hormone receptor–positive breast cancers. There is a fair amount of overlap in patients who would be eligible for either of those agents, but the mechanism of action of their payloads is so similar that there may be cross resistance. These are unanswered questions. In terms of combining sacituzumab govitecan with other therapies, this strategy is being evaluated in planned or ongoing clinical trials. My only reticence is that adding any therapy may worsen the adverse effect profile associated with this drug, so I’ll be looking at those data cautiously.

What was your main takeaway from this year’s ASCO Annual Meeting?

There were a lot of important presentations, not just DESTINY-Breast04 or TROPiCS-02 trials. There were other datasets that were eagerly anticipated. For example, MAINTAIN [NCT02632045] provided the first randomized evidence that we might be able to sequence CDK4/6 inhibitors [for HER2-negative metastatic breast cancer].8 Although it’s not practice changing yet, it was a very well-designed study and provided us the first clinical evidence that [CDK4/6 inhibitors] may be a reasonable tactic. We also had the negative results from PALOMA-2 [NCT01740427] showing a lack of survival benefit with palbociclib [Ibrance] in a first-line setting [of estrogen receptor–positive, HER2-negative breast cancer].9 Those were disappointing data that caused a lot of discussion. And we also had a study in the radiation oncology realm looking at stereotactic body radiation therapy [SBRT] for patients with oligometastatic breast cancer to see if adding SBRT to systemic therapy improved long-term survival. The data indicate that it does not. These data were quite interesting and add pieces to the puzzle to understanding how to apply the therapies we have now. Overall, the meeting does provide us a lot of evidence that novel therapeutics are here to stay. We have more to come, so it’s an exciting time in the world of breast oncology.

Future Perspectives in HER2+ mBC 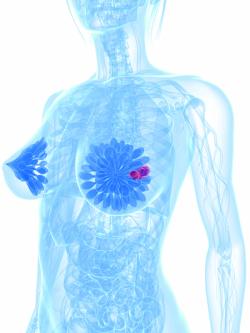