NEW YORK--Researchers at the National Cancer Institute are targeting a T-cell interleukin-2 (IL-2) receptor in an attempt to find an effective treatment for patients with adult T-cell leukemia/lymphoma (ATL), Thomas A. Waldmann, MD, chief of the NCI's Metabolism Branch, said at a symposium sponsored by the New York City-based Cancer Research Institute.

NEW YORK--Researchers at the National Cancer Institute are targetinga T-cell interleukin-2 (IL-2) receptor in an attempt to find aneffective treatment for patients with adult T-cell leukemia/lymphoma(ATL), Thomas A. Waldmann, MD, chief of the NCI's Metabolism Branch,said at a symposium sponsored by the New York City-based CancerResearch Institute.

The targeted T-cell receptors under study are "promiscuous,"he said; that is, they are shared by the interleukin superfamilythat includes IL-2, IL-4, IL-7, IL-9, and IL-15.

No Toxicity to Normal T Cells

The IL-2 receptor is not expressed in resting and activated normalT cells, Dr. Waldmann noted, whereas it is highly expressed inHTLV-1-associated ATL. Thus, tumor cells can be targeted witha radionuclide-labeled monoclonal antibody (MoAb) without targetingnormal cells.

In an NCI trial of 19 ATL patients who were given unmodified mouseantibody targeted to the IL-2 receptor, one third of the patientsunderwent remission, including two who had a complete remission,he said.

In a second trial, in which the MoAb was armed with yttrium-90(90Y), nine of 18 patients with adult T-cell leukemia had a partialor sustained complete remission.

A new trial is underway employing a humanized MoAb armed with90Y. Use of the humanized product should allow repeat doses tobe given safely without development of immunogenicity.

Dr. Waldmann said that this therapeutic approach may also havepotential applications in cutaneous T-cell lymph-oma and in someautoimmune disorders, as well as in the prevention of allograftrejection.

Expert Commentary on the Product Profile of Asciminib 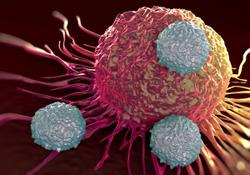