The majority of patients who undergo resection for gastric cancer experience relapse and ultimately die of their disease. Therefore, considerable attention has been paid to neoadjuvant and adjuvant strategies to improve surgical outcomes. Two different approaches have been tested in major clinical trials conducted in the past several years: Postoperative chemoradiotherapy was assessed in a US Southwest Oncology Group/Intergroup study (SWOG 9008/INT 0116), and perioperative chemotherapy was studied in a UK Medical Research Council (MRC) randomized trial (the MRC Adjuvant Gastric Infusional Chemotherapy [MAGIC] trial). These trials demonstrated statistically significant survival benefits in patients with resectable gastric cancer. This review will consider these trials and their implications for clinical practice.

Because the majority of patients who undergo resection experience relapse and ultimately die of their disease, considerable attention has been paid to neoadjuvant and adjuvant strategies to improve surgical outcomes. Adjuvant chemotherapy has improved 5-year survival by 10% to 15% in resected bowel cancer,[5] by 12% to 21% in breast cancer,[6] and by 11% in pancreatic cancer.[7] This approach has also been the subject of considerable research in gastric cancer. Meta-analyses examining the role of adjuvant chemotherapy in resected gastric cancer have been confounded by both the heterogeneity of regimens examined and the methodologic quality of trials included. However, the overall survival benefit from treatment with adjuvant chemotherapy is estimated to be approximately 4%, with greatest benefit in patients with node-positive disease.[4,8,9]

Given the relatively minor benefits of adjuvant chemotherapy seen in these early analyses, surgery remained the standard of care. However, the high rate of local relapse continued to stimulate interest in adjunctive treatment modalities, resulting in two different but beneficial approaches. The first was postoperative chemoradiotherapy, which was tested in a US Southwest Oncology Group/Intergroup study (SWOG 9008/INT 0116, Figure 1),[10] and the second was perioperative chemotherapy, tested in a UK Medical Research Council (MRC) randomized trial (the MRC Adjuvant Gastric Infusional Chemotherapy [MAGIC] trial, Figure 2).[11]

These trials demonstrated clinically and statistically significant survival benefits that have changed practice with two different treatment options in resectable gastric cancer. As the patient populations studied were different, the results are not directly comparable, but they do suggest treatment options for patients at different points in their care.

Because of the high rate of locoregional relapse, including recurrences in the gastric bed after potentially curative resection,[12] the addition of radiotherapy to chemotherapy is appealing as a means of affording greater local control. The Southwest Oncology Group and the US Intergroup designed a randomized controlled trial to compare postoperative chemoradiotherapy to observation alone in patients who had undergone potentially curative resection[10].

Patients with completely resected (R0) stage IB–IV M0 adenocarcinoma of the stomach and esophagogastric junction were eligible (Table 1). The treatment arm consisted of one cycle of fluorouracil (5-FU) at 425 mg/m2 and leucovorin at 20 mg/m2 on days 1 to 5, followed 28 days later by concurrent chemoradiation at 45 Gy in 25 fractions with concomitant 5-FU at 400 mg/m2 and leucovorin at 20 mg/m2 on the first 4 and final 3 days of radiotherapy, followed by two further cycles of 5-FU and leucovorin 28 days apart. Of the 603 patients initially accrued postoperatively, 47 (8%) were then deemed ineligible. Of the 556 remaining cases, 281 were assigned to the treatment arm and 275 to the observation arm. No significant demographic differences between the two groups were identified.

Chemoradiation resulted in significantly improved disease-free survival and overall survival compared to surgery alone. Median overall survival was 35 months in the treatment arm compared to 26 months in the control arm (P = .006) and median disease-free survival was 30 vs 19 months (P < .001). The 3-year survival rate was 50% vs 41%, favoring the chemoradiotherapy group. These figures were preserved with long term follow-up.[13] There were no significant treatment interactions with sex, T stage, N stage, primary tumor location, or D level of nodal dissection.

Grade 3/4 toxic effects in the 273 patients who received postoperative chemoradiotherapy were predominantly hematologic (54%), gastrointestinal (33%), and influenza-like (9%). A total of 49 patients (17%) stopped treatment prematurely due to toxicity. There were also three deaths recorded as a result of the administered treatment: one from a cardiac event, one from sepsis complicating myelosuppression, and one from pulmonary fibrosis. Although treatment was considered tolerable, 100 of the 273 patients (36%) receiving chemoradiation did not complete the planned treatment.

The authors concluded that locoregional radiotherapy plus 5-FU–based chemotherapy administered in the adjuvant setting after resection for gastric cancer significantly improves relapse-free and overall survival. Based on this study, they recommended such treatment as the standard of care for all patients with resected localized gastric cancer without distant metastatic disease.

The apparent success of preoperative chemotherapy in esophageal cancer[14] prompted the development of a similar approach in gastric cancer. A neoadjuvant approach could potentially demonstrate in vivo tumor sensitivity, resulting in tumor regression/downstaging and a higher chance of R0 resection, while treating distant micrometastatic disease at an earlier time after the patient's initial diagnosis. The ECF regimen (epirubicin [Ellence] at 50 mg/m2, cisplatin at 60 mg/m2, both given on day 1, and 5-FU at 200 mg/m2/d given continuously throughout a 21-day cycle) showed considerable activity in the phase II setting, and was the most active of regimens tested in the phase III setting, with superior quality-of-life data compared to the available alternatives.[15-17]

The UK MRC conducted a randomized controlled trial of perioperative chemotherapy (three cycles of preoperative and three cycles of postoperative ECF) to surgery alone in patients with resectable stage II–IV M0 gastric, esophagogastric, and lower-third esophageal adenocarcinoma.[11] A total of 250 patients were randomized to perioperative chemotherapy and 253 to surgery alone. Patients were stratified according to surgeon, tumor site, and WHO performance status. Demographic factors were similar between the two groups.

The authors concluded that perioperative chemotherapy could be administered safely and that it significantly improved progression-free and overall survival, making it a treatment option in this setting.

Both the Intergroup and MRC studies were large, well designed, randomized trials showing statistically and clinically significant improvements in survival in a tumor type for which positive outcomes in studies had been rare. The natural question is: Which approach is better? There is no clear answer.

The Intergroup study enrolled patients after they had undergone a gastrectomy, and they had to be fit enough to receive adjuvant chemoradiotherapy. Therefore, patients who experienced postoperative complications or early postsurgical death would have been ineligible, factors that may have enhanced overall survival and superior "fitness" for treatment. Nevertheless, the study demonstrated a survival advantage for the patients in this group. In contrast, the MRC study enrolled patients at the time of diagnosis and prior to them undertaking any treatment, so those who experienced disease-related complications at an early point after diagnosis were captured in the study.

Patients with adenocarcinoma of the lower third of the esophagus were eligible to enter the MRC study but were ineligible for the Intergroup protocol. However, there was no evidence of differential response to treatment by primary tumor location, and tumors of the lower third of the esophagus, esophagogastric junction, cardia, and distal stomach showed no statistically significant differences in response or outcome. This was also seen in the Intergroup population, where tumor location was not associated with treatment response.

Some have argued that the relative contributions of pre- and postoperative chemotherapy should be examined, and subgroup analysis performed on the MRC data. However, such an assessment was not prespecified, and a post hoc analysis of this sort would be confounded by the fact that the reasons for not receiving the adjuvant component were early progression, postoperative complications, or death.

Questions have also been raised about the extent of the influence of surgery. Whereas 40% of patients in the MRC trial had a D2 dissection, only 10% in the Intergroup study had such an operation. The 2004 Intergroup update could show no evidence of treatment interaction with D-level dissection; however, this has not satisfied all critics. Most authors agree that while the benefit of a D2 over D1 is not clear, a D0 provides inadequate clearance.[18]

The patients in the Intergroup study tended to have a higher T and N stage, which may have accentuated the benefit of a treatment as the group was at higher risk of recurrence. Direct pathologic comparison of tumor stage between the studies is of course impossible, as half the patients in the MRC trial had already received chemotherapy at the time of pathologic analysis. Clincal staging was also different at the time both trials were carried out, with multislice computed tomography (CT) scanning of the thorax, abdomen, and pelvis as well as endoscopic ultrasound (in esophageal and esophagogastric junction tumors) not becoming standard until after both the trials were completed.

5-FU as a single agent is less active than ECF in advanced gastric cancer,[19] and therefore may be less effective at treating micrometastatic disease in patients with apparently localized disease. Using ECF instead of 5-FU could possibly increase the efficacy of the Intergroup approach. This is being tested in a current Cancer and Leukemia Group B (CALGB) study of one cycle of ECF followed by chemoradiotherapy with 5-FU followed by two further cycles of ECF, compared to the treatment arm of the Intergroup 0116 study.

Since the time of the MRC trial, infusional 5-FU has been replaced in the ECF regimen by the oral fluoropyrimidine prodrug capecitabine (Xeloda). This drug's ease of administration obviates the need for an indwelling intravenous catheter and pump (necessary for continuous venous infusional 5-FU). In advanced gastric cancer, capecitabine was demonstrated to be at least noninferior to infusional 5-FU, providing a rational basis for its substitution.[20]

Overall, the selection of the optimal strategy will be influenced by the time at which the patient is referred. In the US-where the pattern of referral is postsurgical-the adjuvant chemoradiotherapy approach will be appropriate. However, in the UK-where the patient is discussed in a multidisciplinary meeting with surgeons and medical oncologists present-there is usually a preference for neoadjuvant chemotherapy. Both approaches represent a standard of care.

The authors have no significant financial interest or other relationship with the manufacturers of any products or providers of any service mentioned in this article. 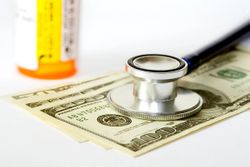