“We are very pleased to announce the data from phase 2 MIRAGE study,” Yoshifumi Torii, PhD, executive officer, vice president and head of R&D Division of Kyowa Kirin, said in the press release. “We continue to see a favorable profile of zandelisib with intermittent dosing that aims to balance efficacy and safety in Japanese patients who have been heavily pre-treated.”

The multicenter, open-label, single-arm phase 2 MIRAGE study was designed to evaluate zandelisib monotherapy in Japanese patients with relapsed or refractory indolent B-cell non-Hodgkin Lymphoma who received at least 2 previous lines of systemic therapy. Patients received 60 mg of oral zandelisib once a day for two 28-day treatment cycles followed by 60 mg once a day for the first 7 days followed by rest for 21 days as part of an intermittent schedule.

The primary end point of the study was ORR. Secondary end points included DOR, progression-free survival, CRs, and the incidence of TEAEs.

A total of 61 patients on the MIRAGE study were evaluated by independent review committee. The median patient age was 70 years and the median number of prior therapies was 3 (range, 2-9).

Patients 20 years or older at baseline who have not received PI3K inhibitors were eligible to enroll on the study. Additional inclusion criteria included not receiving previous Bruton tyrosine kinase inhibitor treatment and having an ECOG performance status of 0 or 1.

Patients were unable to enroll on the study if they had histologically confirmed follicular lymphoma with Grade 3b transformation to an aggressive lymphoma at least once. Patients were also unsuitable for enrollment if they had lymphomatous involvement of the central nervous system, uncontrolled clinically significant illness, or active or a history of interstitial lung disease.

Zandelisib was also assessed as a single agent for patients with follicular lymphoma who received at least 2 previous lines of systemic therapy in the ongoing phase 2 TIDAL study (NCT03768505). In this study, zandelisib produced an ORR of 70.3%, and 35.2% of patients achieved a CR by independent review committee. With a median follow-up of 9.4-months, interim data indicated that 9.9% of patients discontinued treatment due to any treatment-related AEs. According to Torii, data from the MIRAGE study were consistent with those reported in the TIDAL study. 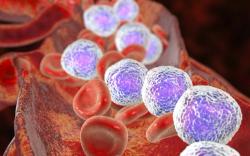