FDA Gives Fast Approval to Gleevec in Treatment of CML

Novartis recently announced that the United States Food and Drug Administration (FDA) approved its signal transduction inhibitor Gleevec (imatinib mesylate) as an oral therapy for the treatment of patients with chronic myeloid leukemia (CML) in the blast crisis, accelerated phase or in chronic phase after failure of interferon-alpha therapy. The effectiveness of Gleevec, also known as STI 571, is based on overall hematologic and cytogenetic response rates.

The FDA granted Gleevec a priority review and approved the drug after only a 2 ½-month review time, making this the fastest approval to market any cancer treatment.

The FDA approval of Gleevec was based on data from three phase II open-label, single-arm studies that showed a major cytogenetic response (complete response = 0% Philadelphia chromosome-positive [Ph+] metaphases; partial response = up to 35% Ph+ metaphases) in patients with advanced stages of CML. Patients with chronic-phase CML after failure with interferon therapy achieved an 88% hematologic response and 49% overall major cytogenetic response-both primary end points of the study.

Women of childbearing potential should be advised to avoid becoming pregnant while taking Gleevec. Treatment with Gleevec is often associated with neutropenia and/or thrombocytopenia.

Novartis has put a comprehensive patient assistance program in place, which insures that uninsured, indigent patients are not denied therapy for economic reasons. A reimbursement hotline is in place and can be reached at 1-877-GLEEVEC. 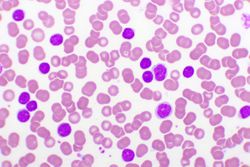