Like the protective plastic cap at the ends of shoelaces that prevent them from unraveling, telomeres protect the ends of chromosomes. These small strips of DNA prevent chromosome tips from fraying during cell division. But as the cells divide, the telomeres shorten and the cells age. Shortened telomeres have been linked to an increased risk of cancer development. Researchers at the Mayo Clinic in Rochester, Minn., wanted to see if telomere shortening was linked to colon cancer development at a younger age.

Like the protective plastic cap at the ends of shoelaces that prevent them from unraveling, telomeres protect the ends of chromosomes. These small strips of DNA prevent chromosome tips from fraying during cell division. But as the cells divide, the telomeres shorten and the cells age. Shortened telomeres have been linked to an increased risk of cancer development. Researchers at the Mayo Clinic in Rochester, Minn., wanted to see if telomere shortening was linked to colon cancer development at a younger age.

“When we look at colorectal cancer, it’s typically a disease of the aging,” said lead investigator Lisa A. Boardman, MD, an associate professor of medicine. “In young-onset colon cancer, could telomere length relate to cancer? Are these patients biologically older based on their telomere length?”

Dr. Boardman’s group measured blood leukocyte DNA telomere length with quantitative polymerase chain reaction (PCR) in 772 people diagnosed with microsatellite stable colorectal cancer. The patients had been diagnosed at less than 60 years and had no history of chemoradiotherapy. These subjects’ telomere lengths were compared with telomere lengths from 1,660 nonrelated, healthy controls (2010 AACR Colorectal Cancer: Biology to Therapy abstract A26).

“We anticipated that we would see some people who had young-onset colon cancer and shorter telomeres compared to people of the same age group who did not have cancer,” Dr. Boardman said.

Instead, the researchers found that in people under age 50, a longer telomere length correlated with a higher colorectal cancer risk. “If you were under the age of 50 and you had the longest telomere length, compared with the middle range, the odds in favor of developing colon cancer was 30%,” Dr. Boardman said. The reverse was true for people over 50, with a longer telomere lowering the cancer risk while a shorter telomere was associated with a 22% increased risk for cancer.

The group also found that the odds ratio (OR) for colorectal cancer in individuals with the shortest and longest telomere lengths was 1.14 (P = .01).

This OR remained high after adjusting for various environmental factors, such as fruit, vegetable, and red meat intake; folic acid intake; and comorbidity of diabetes mellitus, Dr. Boardman’s group said.

The latter factors are relevant because telomere length is susceptible to environmental exposures, Dr. Boardman said. For example, a history of diabetes can shorten telomeres. In this study, the colon cancer patients were more likely than the controls to have diabetes mellitus (P = .005); to consume less fruits (P = .03) or vegetables (P = .01); and to eat more red meat (P = .01). However, they were less likely to take folic acid (P = .06) on a regular basis.

The authors hypothesized that there may be two different types of colon cancer in younger patients: One type involves telomere shortening and so these younger patients may have accelerated aging. The second type may be a distinct group with longer telomeres.

Dr. Boardman said her group is planning a study that will compare telomere maintenance genes in the peripheral blood DNA with telomere lengths in the tumor. Ultimately, patients with varying telomere lengths may have a different molecular profile and may respond to treatment differently.

Anil Rustgi, MD, chief of gastroenterology, T. Grier Miller Professor of Medicine and Genetics, and American Cancer Society Professor at the University of Pennsylvania School of Medicine, asked Dr. Boardman if telomere length information could be used as a predictive tool.

“I’m a patient with colon cancer and I’m less than 50. You find that there is a change in telomere length. What implication does that have as a screening tool for my siblings who are less than 50 years of age?” Dr. Rustgi said.

“I can’t answer that [question] at this point because we haven’t done a sibling study or a family relations study,” Dr. Boardman said. “I’ve heard some recommendations for some people to get their telomere length checked, but I don’t think [that test] is ready for use.”

NSAIDs may prove to be a headache for cancerous stem cells

While the connection between NSAIDs and lower cancer risk has been established, the mechanism of action of NSAIDs has not been clear, said senior investigator Lin Zhang, PhD, an associate professor in the department of pharmacology and chemical biology.

In this mouse model, Dr. Zhang and colleagues found that, within one week, mice that were given sulindac (Clinoril) had markedly elevated rates of apoptosis in their intestinal polyps, particularly in the stem cells that had accumulated precancerous changes, which caused abnormal cell signaling.

They also noted that if a mouse carried a deficiency in SMAC, a mitochondrial apoptogenic protein, this attenuated the tumor-suppressive effect of sulindac.

“That leads us to think that SMAC is an important regulator of this process,” Dr. Zhang said.

The authors then examined polyps removed from patients and found higher levels of apoptosis in stem cells among people who were taking NSAIDs. The findings indicate that apoptosis measures could be a useful way of assessing the effectiveness of chemoprevention with NSAIDs, and lead to the development of new agents to further sensitize abnormal stem cells to these drugs (Proc Natl Acad Sci online, November 1, 2010). 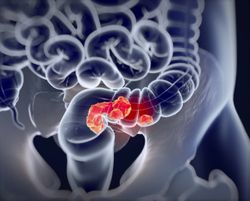