Glioblastoma multiforme remains virtually incurable, with reported median survivals of less than 2 years with standard treatment.[1] In recent years, thalidomide (Thalomid) has shown activity in high-grade gliomas as a single agent and in combination with nitrosoureas and carboplatin (Paraplatin).[2-4] I will describe three cases in which patients with recurrent, multicentric glioblastoma responded to thalidomide plus chemotherapy after failing initial treatment with conventional radiation and chemotherapy for a single malignant glioma.

Glioblastoma multiforme remains virtually incurable, with reported mediansurvivals of less than 2 years with standard treatment.[1] In recent years,thalidomide (Thalomid) has shown activity in high-grade gliomas as a singleagent and in combination with nitrosoureas and carboplatin (Paraplatin).[2-4] Iwill describe three cases in which patients with recurrent, multicentricglioblastoma responded to thalidomide plus chemotherapy after failing initialtreatment with conventional radiation and chemotherapy for a single malignantglioma.

A 43-year-old man diagnosed with anaplastic astrocytoma underwent a rightfrontal craniotomy and gross total resection in July 1998. The surgery wasfollowed by external-beam radiation therapy and four cycles of cisplatin,etoposide, and vincristine. In December 1999, disease progression was found, andtreatment was switched to single-agent temozolomide (Temodar). Disease continuedto progress, and multiple enhancing lesions were documented in February 2000(Figure 1).

The patient then received six cycles of procarbazine (Matulane), lomustine(CCNU [CeeNu]), and vincristine in combination with daily thalidomide at a doseof 400 mg. Initial dose escalation of thalidomide to 600 mg/d was not welltolerated, and thereafter, the dose was maintained at 400 mg/d. Completeresolution of all lesions was observed after four cycles of therapy (see Figure2, p 278).

Mild thrombocytopenia and leukopenia resolved upon completion of therapy withprocarbazine, lomustine, and vincristine. Minor sensory peripheral neuropathywas noted but did not prevent the patient from working full time while receivingtreatment. At 1½ years after disease recurrence, the patient continues toreceive single-agent thalidomide.

Two other cases involving combination chemotherapy and thalidomide afterfailure of first-line therapy resulted in partial responses at our institution.In both cases, the patients were women with a history of breast cancer. Singlebrain lesions were initially suspected to be metastatic disease, but surgicalresection identified them as primary anaplastic astrocytoma. These neoplasms didnot respond to treatment with radiation therapy and temozolomide, and thedisease progressed to multiple enhancing lesions in each patient, with a brainbiopsy-confirmed diagnosis of glioblastoma multiforme.

Both patients subsequently received the combination of cisplatin, etoposide,and vincristine plus thalidomide (200 mg/d) and achieved partial responses(> 50% tumor reduction) after two cycles, with durable responses of 16and 24 weeks. Escalation of the thalidomide dose to 400 mg/d was possible in onepatient; the other was maintained at 200 mg/d after experiencing somnolence athigher doses. One patient died as a result of chemotherapy-inducedthrombocytopenia, and the other died due to complications of meningealcarcinomatosis.

These cases suggest that the addition of thalidomide to standard chemotherapyregimens containing a nitrosourea, procarbazine, cisplatin, or etoposide mayconsiderably enhance activity in patients with recurrent multicentric high-gradeand malignant glioma. The implications of this preliminary experience inpatients with a poor prognosis and few viable treatment options suggest thatfurther study of thalidomide in combination with chemotherapy is warranted inthis setting. 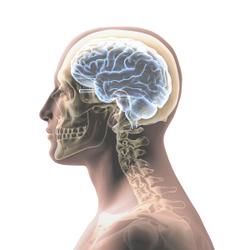