Abiraterone, an agent that inhibits an enzyme critical to the production of male hormones, showed anti-tumor activity in men with hormone-refractory prostate cancer (HRPC)

LUGANO, SwitzerlandAbiraterone, an agent that inhibits an enzyme critical to the production of male hormones, showed anti-tumor activity in men with hormone-refractory prostate cancer (HRPC), according to two studies presented at ESMO 2007.

Abiraterone, being developed by Cougar Biotechnology, Los Angeles, is an orally active inhibitor of the steroidal enzyme 17-alpha-hydroxylase/c17/20 lyase (CYP450c17), a cytochrome p450 complex that is involved in testosterone production. In preclinical studies, the agent has shown the ability to selectively inhibit the target enzyme, resulting in inhibition of testosterone production in both the adrenals and the testes.

Alison Reid, MD, of the UK's Institute of Cancer Research and The Royal Marsden NHS Foundation Trust, reported results of an ongoing phase I/II trial of chemotherapy-na?ve prostate cancer patients who had progressive disease despite treatment with LHRH analogs and multiple other hormonal therapies. To date, 47 patients have been treated with abiraterone. The agent has been well tolerated at doses as high as 2,000 mg/d with minimal toxicity, Dr. Reid said, adding that no dose-limiting toxicity has been observed to date.

Of the 20 evaluable patients with measurable tumor lesions, treatment with abiraterone resulted in a partial radiological response in 11 patients (55%). Seven patients have ongoing stable disease and three have regressing bone disease.

Individual patients also showed improvement in pain and a reduction in opioid use, Dr. Reid said.

Of the 21 patients who have been in the study for more than 3 months, 10 (48%) had a confirmed decline in PSA levels of greater than 50% and 2 (10%) had declines of greater than 90%. Of the 12 evaluable patients with measurable tumor lesions, 2 (17%) had a confirmed partial radiological response, 1 had an unconfirmed partial response, and 5 had ongoing stable disease. Of the 43 patients enrolled in the trial, 28 are still receiving treatment with abiraterone. 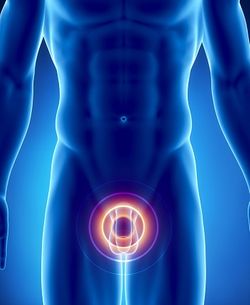